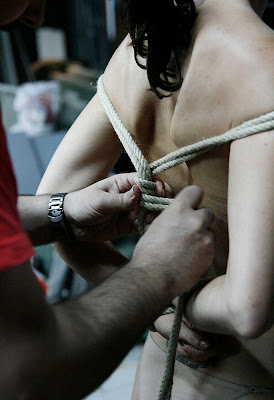 I imagined Estranged Sex XVIII back in August 2009. I saw myself tied up like a larvae upside down, an executer next to me, observed his work. An old man had paid for the scene to happen.

I begun the process of organizing it, trying to get in touch with people who liked S&M, finding the location…

Through one of my cousins, I met the guy who later would become the executer of the picture first attempt. (not the final actor)

He was a sort of sweet and childish giant who treated me with respect and care. It took him a while to understand what I intended, for that he proposed for months to tie me up and take a picture with his camera, until I managed to make him understand that the tying up was not the point, but the picture itself was the object I pursued. I did not longed to be tied, I wanted to represent a scene.

We went on several occasions to clubs but I never stayed to watch S&M sessions. One day there was this old wealthy guy who would pay women to be his submissives and allow him to play with them. You could tell he was excited just by the idea that I watched him do it, but I was not all that curious. Especially knowing the submissive-for-a-fee-gang-bang rape story. I had met this girl on previous occasions and she told her traumatizing experience. And although she might have had overcome the trauma, and was perhaps exorcizing the demons through a controlled repetition of the trauma, or even finding herself aroused by what damaged her in the first place, our briefs encounters, led me to believe otherwise.
Anyway the wealthy old guy said he needed a photographer to take pictures of some sessions with his girlfriends… I was and still am, in such a need for money that I said alright, even though ever since I said OK, I was afraid the session could impact me in a negative emotional manner. But I wanted to see it as work and see myself as someone who can maintain emotional distance.

I know its a game between consenting parts (though I have my reservations depending on individual situations) but I also know myself and I think one has to know that certain things can affect you. I am always up for challenging my taboos, and fears, but she big challenge is to maintain some self preservation altogether and not going kamikaze into self-destruction.

Anyhow, I met with this guy later on that week, to arrange the formalities of the shooting. He showed me amateur pictures of his sessions, purposely shocking, and then after the arrangements were made, he proceeded to ask if I would like to have relations with him every so often.
I looked at the images he had shown me, and said no. He said that our encounters did not have to involve S&M, just sexual relationships in exchange for money. I said no. Said I wanted to earn my living as a photographer. Waved goodbye and left, and obviously knew that the photography project was not true. It pissed me of, that the need of money had put me through a dodgy situation, but well, isn’t that the truth for us all? I wondered what would have happened should I have been younger, when I was all messed up… I thought about those who can´t choose, and those that make the choice for them….

Well back to my sweet giant, he was fun, and we became friends and he sort of accepted that I wasn’t into S&M and once he understood, it was fun to see how he explained my project to the rest of the people in the club: she is a photographer, and needs ME to take a picture for her project where I tie her up, but she isn’t into this, she is a professional photographer.

I was not shocked at the club even though they seemed to try quite hard, but was surprised at how cold it all seemed. They would do sexual stuff out of the blue, and felt to me so totally un-arousing and then there would be a session in some room, also just like that. I thought they would involve sex, as if the S&M was the foreplay but they did not all end up in sex.

Overall I felt calm and secure and except for the wealthy jerk and my psychological concerns about the raped girl, it was all quite friendly and amusing.

I had met the owner of the club where the shooting was going to take place on various occasions. He was a middle aged bearded man, always dressed in suit, with sort of impeccable manners. Amongst all the people I got in touch with, he was the one that did not to try to shock or provoke me, moreover he explained to me some insights of that culture, referred me to books and movies… After meeting him and the wealthy jerk, I added the role of the master in my picture, a master that would be looking, who had paid for this show to happen just for his eyes.

Finally after many months, many visits to the S&amp;M club and discussions with the people involved I organized it for the 17th December 2009.

We were going to be 9, the appointment was at 9 am on a Saturday. I must thank yet again my team, who was ready to come with me and take the picture.

These were the drafts of the images. 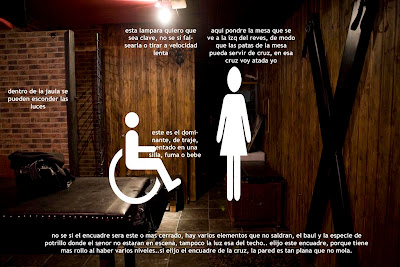 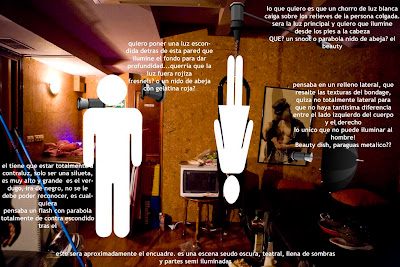 But I received a phone call at 1.30 am cancelling the location. I could not believe my bad luck, I was both depressed and angry. Fortunately I organized a massive session within days so I did not let this event set me back.

Nonetheless, I forgot a little about this picture and carried on with my work.

One day I gave a conference in my school about creative processes. One important part of my lecture talked about taking risks and failing, like I organized that big shooting and it failed to happen.

At the end of the lecture, someone came and asked me if I was still interested in doing the picture. Yes, I was.

So after many months, I was back on track. We went to see a new location. 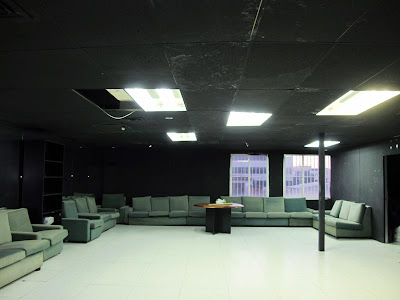 It was perfect. I got excited.

I drew a new draft, the new image resembled more to a play in a theatre, a scene happening in a black empty space. 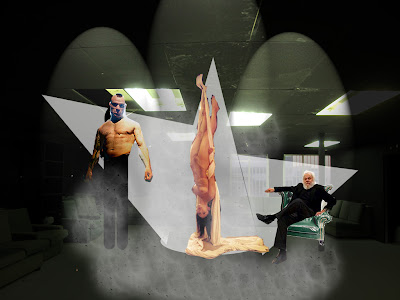 (PS note that the girl within this draft comes from a Nathalie Daoust image, from her Tokyo Hotel Story, that I discovered throughout my S&M endeavours). After I designed the lighting and drew the above draft, I begun to put ads here on my blog, on facebook and any media I could to get the equipment and atrezzo I needed, as well as the different players.
Shopping list:
– red leather sofa looking like this 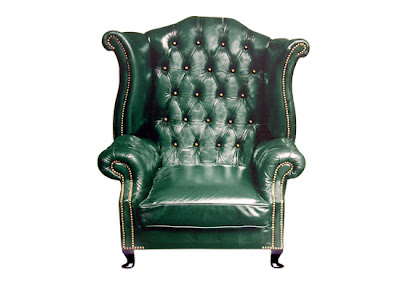 – an around 70 years old master

A friend found a binned wee stinking red leather sofa that I cleaned 3 times to get rid of the smell…and so little by little and with people’s help, I found everything I needed. 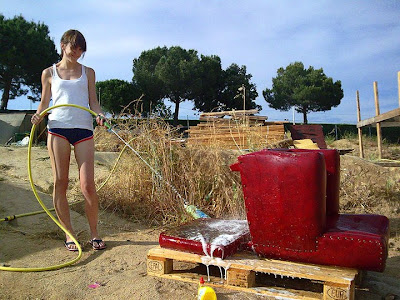 I pre-lighted, tried the bondage…. 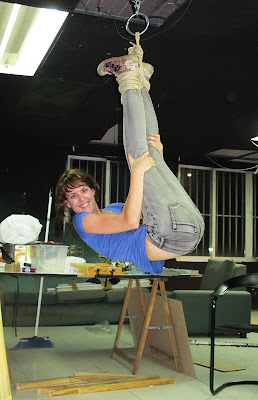 And finally fixed the shooting day!

So this was my team: 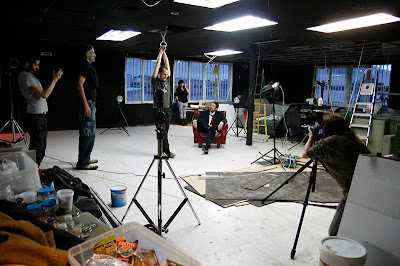 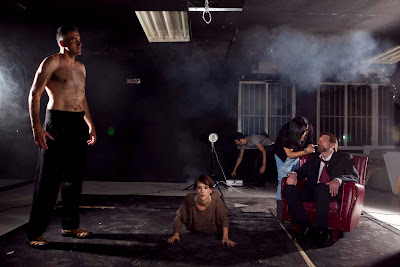 He has no price… He is going to the states now, so yo, the states, you shall return him too me, in perfect working order! 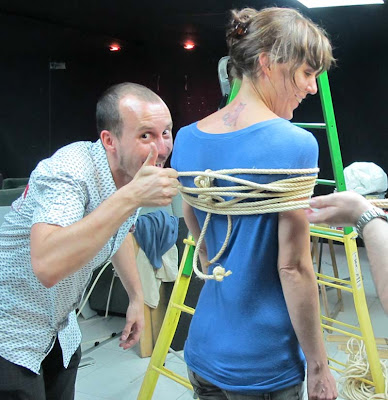 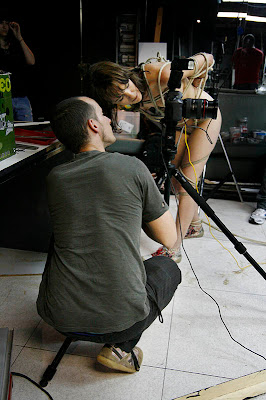 Great soul, great having you! 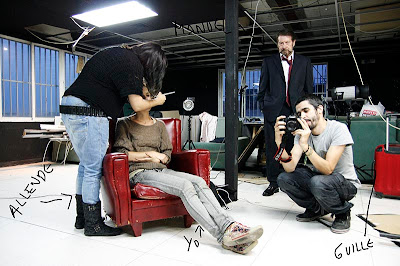 She takes the making of pictures, so she never appears in them, but she is sweet and pretty and I like her fringe and her pics! thank you. 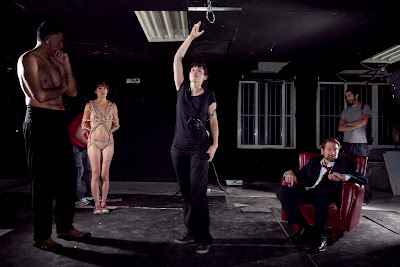 It is not the first time we have worked together and she is one amazing make up artist, so you shall see more of her work soon. 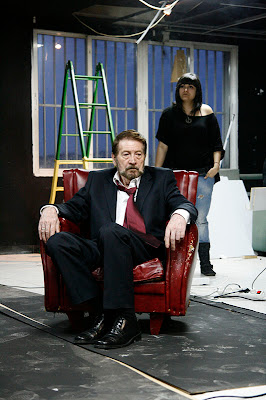 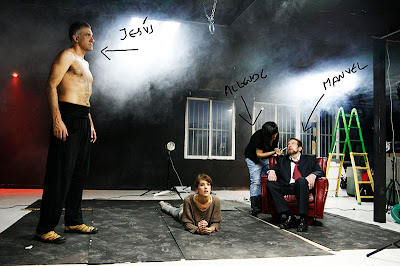 What can I say about the actors, copying with the delays and multitasking without complain. ..perfect acting…Thank you!

Bondage: anonymous, but yes, thanks to you too. 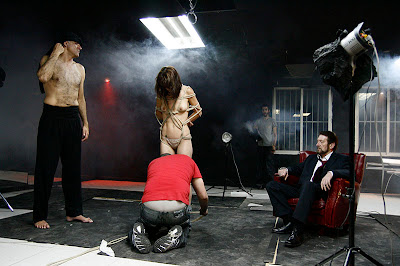 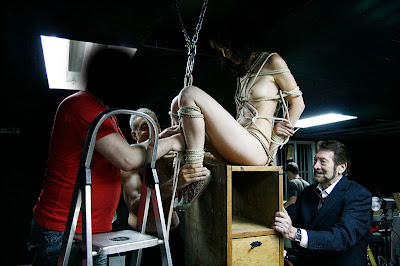 But I must admit, this picture was a nightmare from the start…All the shots that involve juggling various actors is complicated per se, but this one o the first complicatedness price. Finding the location as you have seen was a struggle. For most of the time, it felt it was on a fine line, always near cancellation, one minute it was fine with the owner, then some sort of previously addressed problem re- emerged, for us to deal with it and yet magically come back at some point in the future to stagger things up. This part was very unsettling…I don’t think it helps when there are various intermediaries between your target and you…It makes you feel powerless and at someone’s mercy. And some people have cloudy wills…. 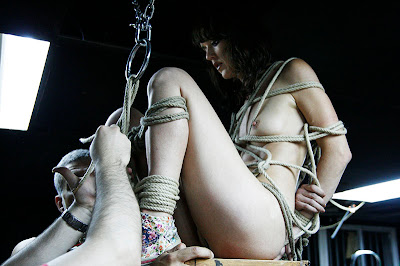 This brings me to the hardest aspect of shooting this picture: psychological dynamics of power and control.
Such relating dynamics can be difficult and exhausting to handle and I must admit felt suffocated quite frequently. Because I wanted to take the picture I had to cope with it, but I have ended up resenting it quite deeply. 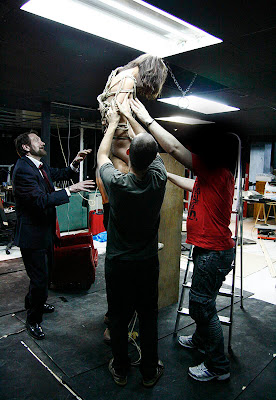 So lets jump into the shooting session.
To mention few difficulties, a week before the shooting they begun construction work in the location and we had to spend more than a hour tidying the place up, there were cloves everywhere, and actually poor executer got one stuck in his feet…

O of the 6 flashes would only trigger randomly. The smoke engine coughed more than working and we had little control over it.

But I believe the toughest part by far, for me, was the eternal two minutes, I was held upside down.

I was in such pain I barely coped with 5 shots. That was all. That is all I am left with. All the problems and difficulties condensed in 5 agonizing shots.

I have hated this shooting so much, in the end it is taking me an effort to like it, but I think we did an amazing work! and actually, people were so incredible sorting out the problems and trying to work super fast whilst I was in pain that they all deserve my sincerest gratitude.

And so, well done!!! I hope we will work again 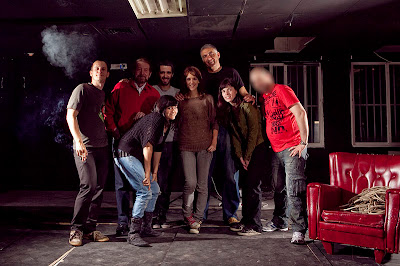 PS: especial thanks to

Oscar Blanco because he was sofa hunting for me and he found the red one that was ideal for the shot! Even though it stinked to urine it was awesome.

Javier Mendoza because he helped me rescuing this picture from the oblivion after my first failed attempts.

30 Comments for The S&M shooting nightmare